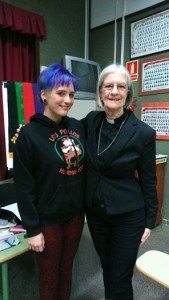 On September 24th 2015 I was licensed as Priest in Charge at St Martin of Porres, El Paso La Palma. The Anglican congregation has been worshipping at this Roman Catholic church since I helped to plant the community in the year 2000 when I was a Reader. We enjoy positive ecumenical communications locally and I am privileged to be able to lead services in three venues which are all Roman Catholic church buildings. This includes a Eucharist service once a month at the chapel of the local Spanish state hospital, where I am chaplain. I am especially interested in working in the palliative care unit and I work closely with the Roman Catholic chaplain priest and his Spanish lay assistant. We also worship once a month at the 17th century church in the centre of El Paso (Nuestra Señora de Bonanza), where we cater not only for the local English speaking community but also for visiting tourists. I also give talks in English and Spanish about the Anglican Church in local secondary schools.
Before being ordained I was an English teacher; first in the U.K., then with the British Council in Spain, where I taught adults and participated widely in the cultural programme and theatre work with the university and autonomous government institutions. I was particularly interested in the teaching of language through literature and I specialised in the Teaching of English as a Foreign Language. On coming to live in La Palma in 1991 I began teaching in state secondary schools and latterly became Head of Department. I was a teaching advisor for two years and held particular responsibility for intercultural relations in schools. During this time I was also a teacher trainer and president of the P.T.A. at my daughters’ Spanish state school.
For several years I was involved in local politics and stood for election for the local Town Hall and Canarian autonomous government. However, at that time I was also feeling a call towards ordination and eventually felt that this call from God would be a continuous lifelong true call and one that I should really listen to.

How We Found the Church in La Palma.
Alan’s Blog